Here is a look at the Grand Rapids Real Estate Market for January 2017.

January 2017 continues to be a Sellers Market.

The Average Days on Market showed an upward trend. The ratio of Sold Price vs. Original List Price is 96%.

So lets break down the above numbers.

Typically it will take 30-45 days to go from an accepted purchase agreement to the close of the transaction. A number of these closed transactions were written in November 2016 and closed in January 2017. A number of January 2017 closing were written in December 2016. Both December and January are typically slower months in real estate for obvious reasons. That could be part of the reason that closed sales for January were down 31.1%.

Homeowners are less likely to put their house on the market in the months of December and January. This will account for the 11.9% downturn in homes for sale.

Who says houses don’t sell in December and January? There was a 27% increase in the number of properties that went under contract in January vs December.

The Average Days on Market (DOM).

The Average Sold Price per Square Footage is Depreciating. 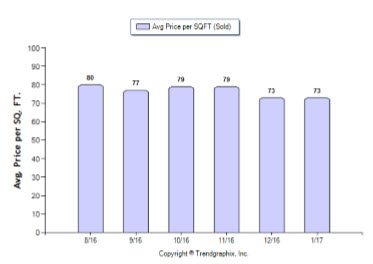 If you’re thinking of selling but want to wait until spring. You can but look at the above numbers. The current number of For Sale properties is down. That means less competition for your property and could put more money in your pocket. If you were hurt in the recession and think you’re still underwater with your mortgage, think again! I’ll bet you have positive equity and didn’t even know it. Check out The Grand Rapids Real Estate Market Report | December 2016 and compare the numbers.

Looking at buying a home in the Greater Grand Rapids Area? Not sure what area or price range?

Lastly, lets look at the Absorption Rate…Say What?

I Have Three Words To Finish The Grand Rapids Real Estate Market Report. Its a…